How have the lives and roles of women changed over the last century? What do those changes say about us as a society? How can a newspaper and its archives help answer those questions?

In this collection of five of our best related teaching resources, we suggest ways for students to shape their own inquiries into any aspect of women’s history that interests them, from women’s suffrage to “emoji feminism.”

In the last 14 months, we have seen both the Jan. 21, 2017, Women’s March on Washington — which some say is most likely the largest single-day demonstration in recorded United States history — and the #MeToo movement, a watershed event that, as The Times’s new gender editor writes, is unique because “for perhaps the first time in history, powerful men are falling, like dominos, and women are being believed.”

What do these recent events say about the future for women and girls in the United States and around the world? Why?

We invite your students to investigate and draw conclusions for themselves. Here are some ways to do it.

In 2013, we suggested A Simple Idea for Women’s History Month:

Read a recent day or week’s worth of The New York Times with a pen in hand, or with fingers ready to click, and make a note of every article, essay, review, photograph or video that you think significantly comments on women’s lives and roles in the world. (Though part of the exercise is seeing these things in the context in which they were originally published, students can also visit the Times Topics page on Women and Girls to see a chronological feed of articles on the topic.)

Then — in pairs, in groups or as a whole class — write, discuss or create using the questions below:

• What do the pieces you chose have in common?

• What patterns did you notice?

• What do they say about the lives and roles of women and girls in our culture? In the world at large?

• What connections (PDF) can you make to one or more of the pieces you chose and your own life? Why does any of this matter?

In the Hands of Janet Malcolm, Journalism Becomes Art

Amy Schumer Doesn’t Care What You Think (That Much)

Mercury Is in Retrograde. Don’t Be Alarmed.

• What’s missing? What stories about women and girls should The Times feature that you think are missing now?

The front page of The New York Times on Oct. 24, 1915. Page through the full edition in TimesMachine.

Another way to do this task? Invite half the class to choose a recent edition of The Times and the other half to choose an edition from any time in the 20th century, and then compare the two.

To find complete editions of any day’s New York Times from 1851 to 2002 as they originally appeared, they can put a date into TimesMachine and flip through what they find. For instance, where, how and why were women or girls written about or depicted 40 years ago, on March 1, 1978?

Or, students can compare Times coverage of two different significant news events about women, like the Oct. 23, 1915, march for suffrageand the Jan. 21, 2017, Women’s March on Washington. What conclusions can they draw?

Aliceana Belling playing in her Captain America costume at her home in Wisconsin in 2015. Related ArticleCreditDarren Hauck for The New York Times

In honor of Women’s History Month in 2016, we asked our spring Student Council — 25 teenagers from all over the world who worked as a kind of advisory board for us that year — to search The Times and find the most interesting pieces they could on the broad topic of gender.

Using both Times search and TimesMachine, they unearthed everything from a 1911 report on the Triangle Shirtwaist factory fire and a 1972 Times review of “Free to Be … You and Me” to then-current articles, videos and essays on Hillary Clinton, campus rape debates, gender pronouns, abortion, Title IX, parenting and the struggles of the transgender community.

What can your students find? What specific topics in women’s history interest them most? What articles, essays and images on this topic can they discover? Invite them to create their own annotated lists to share with someone, whether the rest of the class, your school’s history department or for a display in the school library.

Women on the March: A Lesson Plan on Imagining the Future of Feminism

We published this lesson plan in 2017, just after a bruising presidential election between a woman who aimed to break the “ultimate glass ceiling” and a man whose rhetoric was reminiscent of a pre-feminist era. Women’s History Month arrived that year as many were wondering what the movement should look like.

In the lesson, we ask students to define feminism, then imagine what feminism should look like in the United States today. Then we encourage them to consider the role that intersectionality should play in the women’s movement, to analyze how women are represented in the media today and to learn more about the issues central to feminism’s agenda.

Students can also answer our Picture Prompt, “Do you consider yourself a feminist?” or our Student Opinion question, “What Does Feminism Mean to You?”

The Reckoning: Teaching About the #MeToo Moment and Sexual Harassment With Resources From The New York Times

The #MeToo movement has inspired a “tsunami” of stories, from newspaper front pages to social media to private conversations between friends and relatives. It is, many believe, a watershed cultural moment.

Has it touched your community or school? How have you and your students responded?

In this unit, we pull together a wealth of Times reporting, opinion and video to suggest several ways to begin confronting the questions and issues the movement raises. Students begin by building background on the history of the topic, then understand its impact today. They are then invited to do any of a series of exercises, from debating whether the movement has gone too far, to looking at its role among teenagers and in school, to creating visual art, essays, oral histories or social action campaigns around the issue.

Overlooked: Teaching With the Obituaries of Remarkable Women

Ida B. Wells wrote about the victims of racist violence and organized economic boycotts long before the tactic was popularized.

In honor of International Women’s Day in 2018, The Times published a collection of obituaries for women who had been “overlooked” in their own time. Here is the introduction:

Obituary writing is more about life than death: the last word, a testament to a human contribution.

Yet who gets remembered — and how — inherently involves judgment. To look back at the obituary archives can, therefore, be a stark lesson in how society valued various achievements and achievers.

Since 1851, The New York Times has published thousands of obituaries: of heads of state, opera singers, the inventor of Stove Top stuffing and the namer of the Slinky. The vast majority chronicled the lives of men, mostly white ones; even in the last two years, just over one in five of our subjects were female.

Charlotte Brontë wrote “Jane Eyre”; Emily Warren Roebling oversaw construction of the Brooklyn Bridge when her husband fell ill; Madhubala transfixed Bollywood; Ida B. Wells campaigned against lynching. Yet all of their deaths went unremarked in our pages, until now.

As you can see, teachers have already begun thinking about ways to work with the collection: 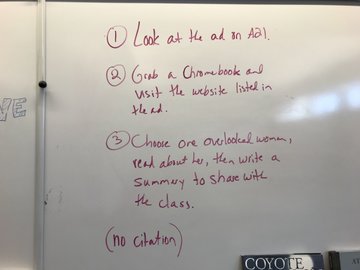 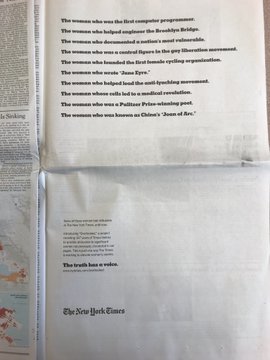 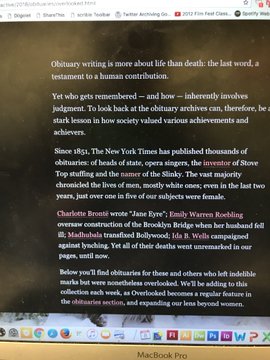 In honor of #InternationalWomenDay2018, my Ss are reviewing an ad about the @nytimes Overlooked project, visiting the website, choosing a woman to learn more about, and writing a summary of her life to share with classmates. https://www.nytimes.com/interactive/2018/obituaries/overlooked.html …

As Sarah Mulhern Gross suggests, invite each of your students to skim these pieces (or other obituaries of interesting women) and choose one to study in greater depth. What more can they learn about this person? What do we understand about her today that may not have been understood or appreciated in her own time? What can we learn from her?

You might then challenge students to create a Women’s History Month gallery showcasing these lives and achievements. For instance, each student might create a poster that includes elements like:

• A short biography, or list of five to 10 interesting facts about this person

• Quotes by or about her

• What we can learn from her today

• How her life or work connects to your own

Finally, as students reseach, they will undoubtedly discover other “overlooked” women. If they do, they might use this form to nominate candidates for future obits. They can also read an essay from The Times obituaries editor about how he approaches the challenge of diversifying subjects.

Text to Text | Groundbreaking Women, Then and Now

As part of our continuing Text to Text series, we celebrated Women’s History Month in 2014 by collaborating with the Makers project, a digital and broadcast initiative from AOL and PBS that showcases stories of groundbreaking women from all walks of life.

We chose two videos from their growing collection and matched both with Times reporting. One video was about Sandra Day O’Connor, the first female justice of the Supreme Court; the other focused on the young blogger, editor and — in The Times’s words — “girl oracle,” Tavi Gevinson.

The lesson also links to many Makers videos about well-known women in other fields, along with the Times Topics page for each, and we invited readers to pair any of them the way we did, and, while watching, ask the key questions: What can we learn from the stories of women who broke barriers in the past? How is a new generation of women redefining feminism?

How do you teach women’s history? Let us know!