Awash in Pink, But Breast Cancer Awareness Isn’t a Cure 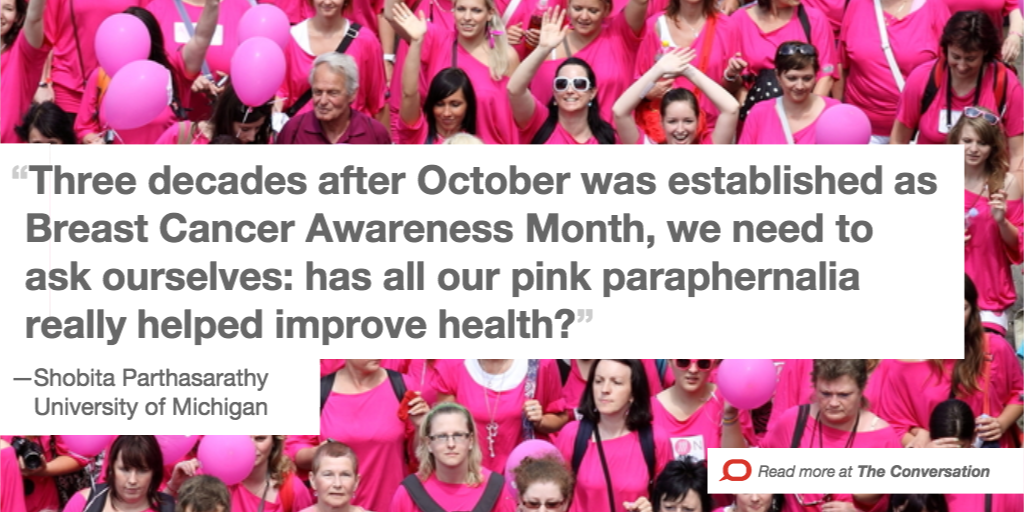 This month, we are inundated with pink. By wearing pink ribbons, purchasing pink products, and participating in walks and other collective activities, citizens try to raise awareness of the scourge of breast cancer, with the eventual goal of curing the disease. But three decades after October was established as Breast Cancer Awareness Month, we need to ask ourselves: has all our pink paraphernalia really helped improve health?

At best, the results are mixed. Studies show these campaigns can put a particular disease on the map, which can be valuable for rare illnesses. Last summer’s Ice Bucket Challenge for amyotrophic lateral sclerosis is a perfect example. It raised the disease’s profile and the ALS Association generated US$100 million in donations in a month. But dumping a bucket of ice over your head doesn’t teach you anything about the disease or how it affects those who suffer from it. Those who donated money had little sense of how their efforts might improve the health and lives of ALS patients, and a year on, the disease and its sufferers have been largely forgotten.

The longer history of breast cancer awareness efforts gives us a deeper understanding of the benefits and limits of these kinds of campaigns. Without a doubt, the past three decades have generated an enormous increase in public awareness of breast cancer. There have been thousands of consciousness-raising events across the world, and hundreds of targeted initiatives among government agencies, major corporations and nonprofit organizations, to the point that it’s not strange to see even NFL players decked out in pink during October.

Breast cancer research funding has grown considerably. In 1990 the US federal government spent less than $100 million on the disease. Now the government and top private foundations spend at least $1 billion annually. And there has been a massive increase in mammography screening.

But across the world, breast cancer rates have gone up right along with awareness. In the United States, a woman’s lifetime risk of breast cancer has gone from one in 20 in the 1960s to one in eight today. While part of this shift can be explained by increased access to mammography, researchers also point to long-term use of hormone therapies and lifestyle changes. This year in the US, nearly a quarter of a million women will be diagnosed with invasive breast cancer. Mammography does not seem to reduce breast cancer mortality.

And while survival rates have improved for white women, women of color have not seen the same gains: today, black women are 40% more likely to die of breast cancer than their white counterparts. Even women of color who are diagnosed early have more aggressive cancers. Low-income women also have difficulty accessing the expensive treatments that are improving survival rates for middle- and high-income women.

Also problematic is the fact that the breast cancer awareness movement’s enormous success has actually led women to overestimate their risk of getting the disease while underestimating their risks of contracting more common – but at least as deadly – conditions, including heart disease.

So while awareness efforts can focus significant public attention and help scientists raise funds for research, the impact on eradicating the disease itself is much less clear.

Does that mean we should abandon such efforts? Absolutely not. But in the fight against a particular disease, we need to understand that awareness efforts are only initial steps down a very long road. The time has come for us to think about other steps we need to take.

We can begin by putting at least as much time and effort into understanding the social, health, economic, environmental and policy-related challenges faced by individuals at risk for and suffering from a particular disease. Then we should help them fight these battles. Imagine “national days of action” in which we work within communities to improve access to the local health infrastructure. Or we could direct fundraising to organizations that serve patients’ practical and emotional needs. In the case of breast cancer, these organizations provide help in getting to the grocery store, interacting with medical professionals and communicating the patient’s wishes, and providing home care.

If we continue to focus on increasing research funding, then we need to ask questions not only about the percentage of money actually spent on research as opposed to overhead, but also how to ensure that this research will benefit those suffering from the disease. Scholars have suggested, for example, that decisions about allocating research funding be tied to the potential for improved health outcomes and the researchers’ track records in achieving them. At the moment, funding is doled out based primarily on scientific priorities that may or may not align with health and social priorities.

Others have argued that in order to ensure that findings turn into widely available new technologies rather than expensive innovations available only to a few, research efforts must be truly interdisciplinary. So a breast cancer team could include not only biologists but also social scientists, public health and policy experts, and even patients. They would work together throughout the research process to produce outputs that are acceptable, useful and affordable to the populations most in need.

And we need to pressure research funding organizations and other policymakers to ensure that intellectual property agreements do not hinder access to important treatments, preventive or diagnostic measures. Until 2013, for example, genetic testing on genes linked to breast and ovarian cancer was extremely expensive in the United States due to a patent-based monopoly held by biotechnology company Myriad Genetics. But public interest lawyers, civil society groups, and other citizens fought against the patent, and now the technology is cheaper and more widely available. The competition that has emerged may produce more research and better testing too.

If we continue to focus our advocacy on disease awareness efforts, then we will only make limited progress toward our real goals. We must think strategically about generating the same kind of public engagement in all the other steps down the long road toward better health and cures.