For many, Valentine’s Day is the most dreaded holiday of the year — whether they’re in a relationship or not. The pressure to find a perfect gift, or just facing the crushing loneliness, can be too much to bear! Not to worry, coffee lovers. Starbucks is here to take the edge off with a super sweet holiday drink based on a popular chocolate.

On Thursday, Feb. 7, Starbucks stores in the U.S. and Canada will be bringing back its limited-edition Cherry Mocha which made its debut this day last year.

To make the drink, baristas start with hot espresso poured over “a slightly sweet mocha sauce and candied cherry syrup,” which is then mixed with steamed milk, before being topped off with whipped cream, sugar and a touch of cocoa sprinkles, according to Starbucks.

The drink is available hot, iced or in blended form as a Frappuccino.

Last year, the beverage caused a minor stir among chocolate lovers. Some foodies love the idea of a drink that closely resembles a cherry cordial from a traditional Valentine’s Day box of chocolates — but not everyone is on board.

TODAY staffers tried the hot version of the Cherry Mocha, as well as the blended Frappuccino. Like many of Starbucks’ holiday drinks, they were both really, really sweet and had tasters divided.

“It is literally just a Java Chip [Frappuccino] except they replaced the chocolate chips with that cherry flavor,” said a TODAY staff member after trying the icy drink.

“I love the mocha part but the cherry flavor is really cough syrup-y,” said another taster. So, depending on your taste buds, this drink could either make you fall in love — or prompt you to seek out a new coffee obsession immediately.

For non-coffee lovers, Starbucks is also releasing a “Confetti Hearts Cake Pop” made out of chocolate cake with a milk chocolate icing, and a Heart Sugar Cookie, that’s topped with a pink or white chocolate coating and sprinkles. 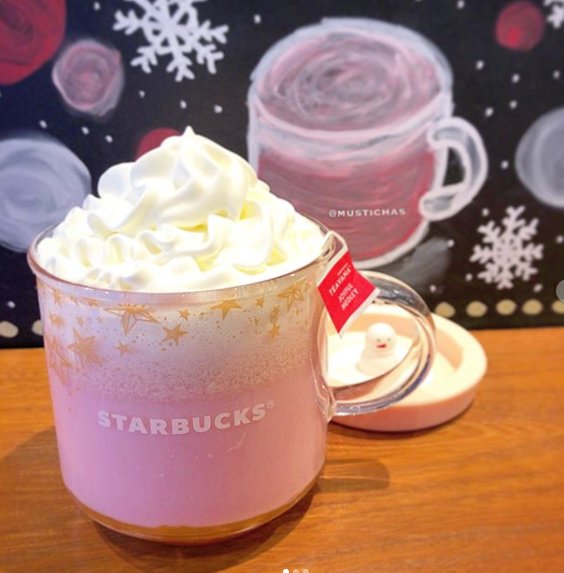 Tag a friend who would love a Pink Latte?

And overseas, Starbucks made millennial hearts sing with its Pink Medley Tea Latte. The beverage, which is only available in Japan, is a blend of jasmine and oolong teas, mixed with a peach and strawberry flavoring that gives the drink its gorgeous cherry blossom color. Similar to the Cherry Mocha, this latte is also prepared with steamed milk.

Starbucks Cherry Mocha will only be available for the next seven days, until Feb. 14, which is plenty of time to load up on your newest caffeine fix as you get your Valentine’s Day plans together.