Skip to content
Sometime in the third quarter, I forgot where I was. Having worked often from the media seats at NBA games abroad, the scenes before me homogenised into so many I had seen in the past. Breathtakingly-quick basketball action on the court. Hip-hop music blaring out the loudspeakers. Cheerleaders dancing mid-court. T-shirts being swung up the stands to ecstatic fans. The squeak of sneakers on the beautifully-polished hardwood floor. Celebrities on the front row. The thud of the bouncing basketball, the twang of the rim, the feathery joy of a swish.And another moment later, I remembered. Perhaps it was the quality of chai in the media room, done just the right, desi way. Milky and sweet and flavourful. Ah. This was India. Yup-there was an NBA game happening in India. I was home.Most of the attendants in the NSCI Dome in Mumbai, a roughly 5000-seating arena, must have felt the same sense of surreal displacement. What was happening in front of us felt like a dream, like something we’d known intimately before, but presented in a new package that was completely the same and completely different to how we remembered. On October 4, 2019, history was made at this arena when the NBA held its very first preseason game in India, featuring the Indiana Pacers and the Sacramento Kings.

From the moment that Indian YouTube celebrity Bhuvan Bam sang the Indian national anthem pregame and the players on either side stood in attention to the “Jana Gana Mana”, we all felt the goosebumps, that we were in for something unique. What even the most optimistic NBA fans among us could’ve barely predicted is that, what would unfold, would be remembered as perhaps the greatest preseason game ever played.

The intermingling of cultures-India and NBA-was present all night, meshed together to create a flavourful new dish. NBA legends like Larry Bird, Vlade Divac, Dikembe Mutombo, Detlef Schrempf, Jason Williams Doug Christie, and Peja Stojakovic found their place close to the court, around Indian celebrities. Bam’s Indian national anthem was followed by the American ‘Star-Spangled Banner’. Mid-court entertainment included NBA cheerleaders dancing to Bollywood beats and Indian dance troupes to American rap. The commentating teams of the English and Hindi broadcasts sat side by side. It was the most masala ever sprinkled on an NBA contest.

By far the most novel aspect of this event, however, were the rest of the attendees. The NBA filled up almost the entire arena with over 3,000 schoolkids from 70 schools around Mumbai. Apart from the special guests in the lower bowl, this first game was booked exclusively for these children, all of whom have been part of the Jr. NBA grassroots Reliance Foundation programme.

MORE: Takeaways from Game 1 of the NBA India Games

This was a first-time endeavour by the NBA anywhere in the world, and the kids provided a sensational spark of energy. The arena was divided between fan allegiances – Kings and Pacers – and both sides cheered on at the top of their lungs. It was a small arena compared to most NBA stadiums, which meant that nobody had the ‘nosebleed’ seats, and the echoes of “Let’s go Kings!” or “Let’s go Pacers!” reverberated to a loud beat all night.

The referee threw up the ball and it began. Myles Turner of the Kings won the jump-ball. On the very first possession, the Kings passed the ball around to nearly every player in their starting five, before De’Aaron Fox cut across one baseline and passed out to Harrison Barnes waiting unguarded outside the three-point line in the far corner. Barnes, the only member of either team to have visited India, immediately let it be known that he was a little more familiar with the atmosphere. He took the shot, a three-pointer, and swished it in, becoming the first scorer on the board.

The decibels rose as the game continued. Fans chanted for both sides, for almost every basket, for every big moment. Preseason games are usually an occasion for teams to play themselves into form and game-shape, and defences are usually not as sharp as they would be in the height of the regular or post-season. The Kings took advantage of Indiana’s lapses and jumped off to an early lead. They scored 39 points in the first quarter and held a massive 21-point lead in the second.

But Indiana regrouped. Playing without their injured All Star Victor Oladipo, the Pacers found energy from players like TJ Warren, Jeremy Lamb, Domantas Sabonis, and Malcolm Brogdon-all newcomers to the team except for Sabonis. The second-half started with a 15-3 Indiana run, and we had a game again. For Sacramento, Buddy Hield, Barnes, Fox, and Bogdan Bogdanovic ensured their side kept a slim lead.

Preseason encounters usually peter out by the end, if one team takes a comfortable enough lead, and both decide to rest their top players and give the reserves some burn on the floor. But not in Mumbai. It seemed that some of the Maximum City’s frenetic energy rubbed off on the players on court, too. Players dove for loose balls, committed athletic plays, took contact and finished, defended with passion in the second half, got bruised and battered.

Early in the game, Sabonis took a blow to his head early and left with his forehead bleeding, only to return with a headband and more momentum. It was like that for everyone all night – and especially in the game’s final moments. In what felt like a playoff atmosphere – in preseason!! – the game came down to the wire. Down by three in the dying seconds, Indiana’s coach Nate McMillan drew a play for Warren, and Warren obliged by sinking a tough three to tie the game at 118-all.

Just like every rush-hour traffic jam in this city, the NBA’s first game in Mumbai was going into overtime. No Indian party ever ends on time, and neither did this game. Five more minutes.

It was in OT that the Pacers took their first lead since early in the first quarter. The Kings didn’t make it an early escape, but the Pacers survived for a breath-taking 132-131 victory.

Few of us had ever seen NBA players this motivated in the preseason, feeding off the energy of the kids in attendance and ensuring that India would remember the incredible show they’ve put on. In the post-game presser, Kings Coach Luke Walton, a little down after taking the loss, managed to find final words of optimism for being a part of this surreal experience.

“It’s my dream to see India becoming a truly multi-sport nation.” – Mrs Nita Ambani at the first #NBAIndiaGames between @SacramentoKings & @Pacers, where she thanks @NBA for partnering with #RF over the last 6 years, for the #RF Jr. NBA program. #RelianceFoundation #RFESA #RFNBA 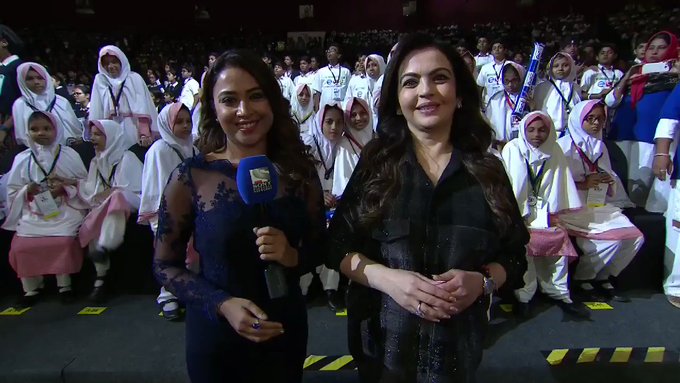 28 people are talking about this

“I thought it was amazing,” Walton said. “I thought it was awesome. What a cool event to be part of NBA basketball… The crowd of kids that have come through junior NBA, and then we got on to the court, and whoever scored, they were cheering!”

“The thing about NBA guys is that, they’re gonna sacrifice their body, that’s how they got here in the first place… But I do think there was a little extra on it, being here in India.”

And so, concluded this special night. The NBA had actually played a game in India. On the way, they had given thousands of local kids a once-in-a-lifetime experience, sowing the seeds of future NBA fanatics, introducing India to the best highlights of the NBA experience. But this experience had ‘a little extra’ on it, a lot of Mumbai, a lot of India. It was the NBA, brewed with Indian tea leaves and spices. It was the taste of basketball’s future.

For more updates and stories on the NBA India Games 2019, you can follow NBA.com’s page dedicated to the historic event.