Tyler Skaggs, a pitcher for the Los Angeles Angels, has died, the baseball teamannounced Monday.

He died in Texas where the Angels were set to play the Texas Rangers Monday.

His cause of death was not immediately clear.

Police in Southlake, Texas, said officers found Skaggs when they responded to a report of an unconscious man in a hotel room around 2:15 p.m. Monday. He was pronounced dead at the scene, police said.

No foul play is suspected at this time, police said.

“It is with great sorrow that we report Tyler Skaggs passed away earlier today in Texas,” the Los Angeles Angels announced on Twitter. “Tyler has, and always will be, an important part of the Angels Family. Our thoughts and prayers are with his wife Carli and his entire family during this devastating time.” 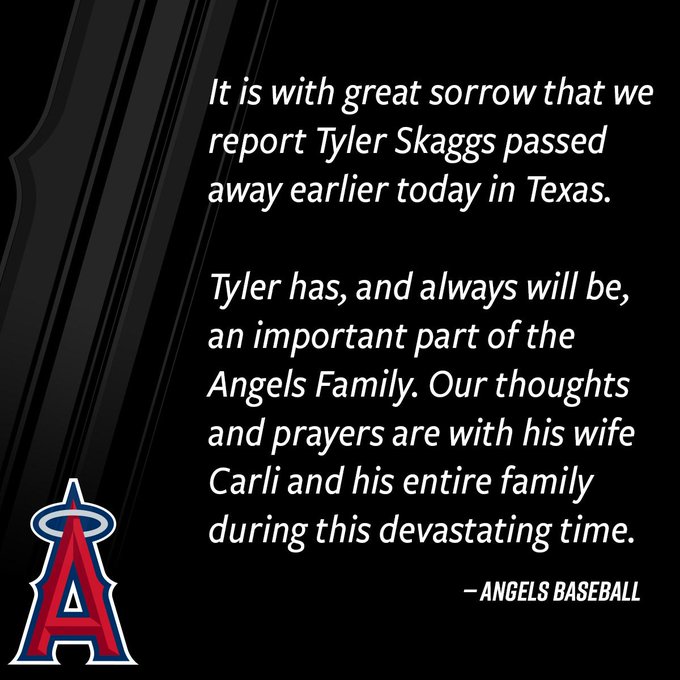 “All of us at Major League Baseball extend our deepest condolences to Tyler’s wife Carli, their family, their friends and all of his Angels’ teammates and colleagues,” Baseball Commissioner Robert D. Manfred, Jr. said in a statement. “We will support the Angels’ organization through this most difficult period, and we will make a variety of resources available to Tyler’s teammates and other members of the baseballfamily.”

The Rangers in a statement offered “deepest sympathies to the family of Tyler Skaggs and to the entire Angels organization on this shocking loss.” The team’s manager, Chris Woodard, remembered Skaggs as an “intriguing guy” and a formidable opponent.

“He wasn’t a guy I enjoyed having to go up against. He gave all the teams I coached fits. A very promising arm,” Woodard told reporters at a press conference Monday. “Everybody spoke very, very highly of him from a character standpoint. He was tough to root against because you heard such great things about him. It’s awful to think that’s not going to be around anymore.”

Monday’s Angels vs. Rangers game has been postponed.

Our thoughts are with Skaggs’ family, friends and the @Angels organization,” the team wrote on Twitter.

The Los Angeles Dodgers are deeply saddened to hear about the passing of Angels pitcher Tyler Skaggs. Our thoughts are with Skaggs’ family, friends and the @Angels organization.