“Finally I can share with you guys this project that I have been developing for the last year,” Kardashian wrote. “I’ve been passionate about this for 15 years. Kimono is my take on shapewear and solutions for women that actually work.”

The name of the brand is clearly a play on the reality star’s first name. But naming a line of tight-fitting undergarments meant to control and shape people’s bodies after a loose-fitting silk robe that has held cultural significance in Japan since the late eighth century makes very little sense — especially since the 38-year-old entrepreneur is not Japanese herself.

People on Twitter expressed their confusion and accused Kardashian of cultural appropriation — much like the times she wore Fulani braids, sported an Indian headpiece and appeared to be in blackface.

Yeah, I see the pun, Kim, but appropriating the name of an ancient Japanese garment with an array of sacred associations for your butt ‘n’ belly flattening brand is just really…something

On Tuesday, Kim Kardashian West announced her latest venture, a shapewear collection. Called Kimono, it is a “take on shapewear and solutions for women that actually work.” The products will come in…

Kim Kardashian really trademarked the word kimono. So she owns a whole word that comes from Japanese culture to describe a specific garment and she just…did that. I’m literally so fucking sick of these people lol 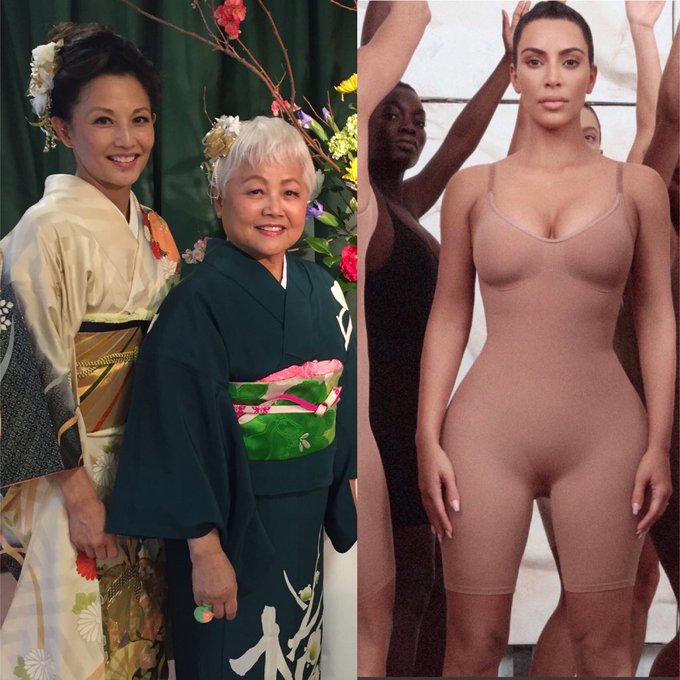 Absolutely tasteless and awful. You have ZERO respect to the Japanese culture, do you. What’s wrong with you.

I’m from Japan. For us, Kimono represents the beauty & elegance of the country’s tradition. Your spandex underwear brand has nothing to do with it. I’m offended.

… Yet no plus-sized models were featured in her photos.

Cool, but if you’re selling up to a 4x it would have been nice to see your product on women up to that size in your promo shots. It’s hard to buy a product if you can’t see how well it works on different body types.

Okay Kimberly are you actually going to have plus size models showing what a bigger body looks like in these or just continue to use toned and fit models who honestly don’t even need to wear shape wear? You have a good size range but come on girl. You know better.

Kardashian is not the first person to trademark the word “kimono.” According to The Los Angeles Times, it has been used twice before for software and “sheaths for pens.”