Ben Simmons splashes his first career 3-pointer, and the Sixers react like they just won the NBA Finals

It was from well beyond the line, and it was nothing but net

Remember where you were, ladies and gentlemen. October, 8th, 2019. Roughly 8:10 p.m. EST. Tell your grandkids, that was the night Ben Simmons made the first 3-pointer of his NBA career. It wasn’t against an NBA team, mind you. The 76ers were playing host to the Guangzhou Long-Lions from China in a preseason opener. But let’s not get bogged down in the details of such a momentous occasion. This thing was straight cash, homie. A good five feet beyond the arc and nothing but net.

BREAKING: Ben Simmons made a 3 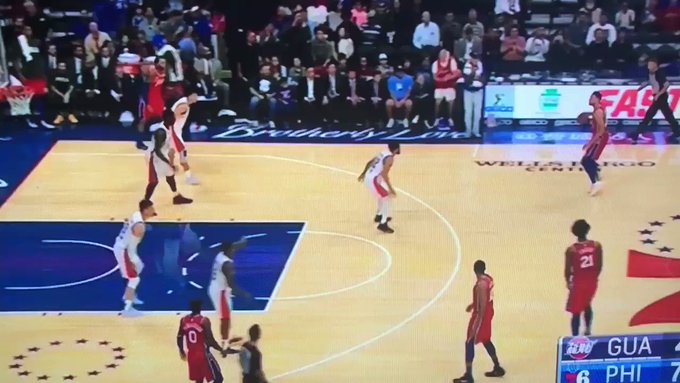 I wasn’t around for the moon landing, but this has to be in the same conversation, doesn’t it? I mean this changes everything! Now, I’d be remiss if I didn’t mention that right around the same time Simmons was hitting his triple, Steven Adams of the Thunder and Boban Marjanovic of the Mavericks were also cashing threes of their own, so we can’t discount the possibility of some sort of global phenomenon having just occurred. Perhaps we’ll wake up tomorrow and the Beatles will never have existed.

But assuming this was real, all jokes aside, this is a BIG FREAKING DEAL. Simmons, to this point, had never made a 3-pointer in his NBA career — preseason, regular season or playoffs. Does this mean he’s suddenly going to be some legitimate threat from distance that defenses are going to have to account for? It could. I don’t want to get too ahead of myself here, but again, that stroke looks very clean and repeatable. That doesn’t look like a one-time thing.

There is no way to overstate the potential impact of Simmons developing even a halfway threatening 3-point shot. He would become a top-five player in the league almost immediately. Now, there’s a long way between sticking one three against the Guangzhou Long-Lions and doing it on a regular basis against NBA defenses, but also understand, that defense you’re watching in the clip is about the same kind of defense Simmons sees in the NBA. Nobody presses up on him. Heck, there are times his defenders is sunk all the way back into the paint. If he wants to walk into an off-the-dribble pull-up three, he can do that any time he wants.

Until he starts making a few, of course, which will change the way teams have to defend him not just on the ball, but off it, too. That, in turn, would change the the whole dynamic of the Simmons-Joel Embiid coexistence. If Simmons can space the floor even just a little bit, rather than having to hang around in the paint and muck up Embiid’s operating zone, mad, I’m telling you, this could be big. There’s a reason the Sixers reacted the way they did when Simmons hit that shot. They know — we all know — that if he can do that at even a halfway reasonable rate, the Sixers might become the favorite to win it all.

That’s not hyperbole. It’s simply the weight that Simmons’ jumper carries. We saw him all summer drilling shots in open gym and we were all quick to dismiss what was happening. “Talk to me when he does it in a real game,” we said. Well, now he has. So now we’re going to say, “Talk to me when he does it against an NBA team.” Fair enough. But don’t get caught watching the paint dry here. Ben Simmons’ jumper is the single-most pivotal skill in the NBA, and it might be developing right in front of our eyes.